Henry ORMSBY, born on 19 February 1859 at Brickrow Farm St. Quivox & Newton, Ayrshire, Scotland, was the youngest of James ORMSBY and his wife Helen STEEL’s seven children. His father, James, was not home at the time of his birth, although there is no indication where he was; perhaps in Ireland, or at a cattle sale elsewhere in Scotland. The decision about a career or job was important and Henry watched the choices made by his four older brothers. Like his older brother Richard [Richard Steele ORMSBY] (and maybe James [James ORMSBY]), Henry decided that farming was not for him. He chose a life at sea and had ample opportunity for apprenticeships and training in the seaport town of Ayr. By 1881 Henry, 22, lived in Tynemouth, Northumberland, England as an unemployed marine engineer, perhaps still an apprentice. By 1887 at the time of his marriage Henry had attained his Master’s Engineering ticket.

After Mary Jane’s death Henry moved home with his sons where he had family to help raise them. His work as a marine engineer likely required him to be away for extended periods. In the 1911 census he lived at Gibbsyard with his mother (89), his brother Andrew (63) and his two sons. This census identified that at age 52 Henry had retired. 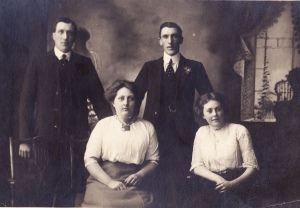 Photo left, standing, left to right is Henry and Thomas WATSON. Sitting left to right is Henry’s niece Helen (Nellie) McNab Steel ORMSBY and an unknown woman, possibly another niece, a MUIR cousin. This is the only known photo of Henry. The photograph was likely taken in Ayr, Ayrshire as there is no record of Nelly having travelled. The date is prior to 1912 as Thomas Watson, a chauffeur, immigrated to Canada in 1912. Photo is from the collection of Donald Slater, (for Donald’s other family photos see www.flickr.com/photos/palaeoecogeek).

On 4 June 1913, at 121 High Street in Ayr, widower Henry married Katherine MUIR, the daughter of Thomas MUIR and his wife Jeanie CRAWFORD.

Henry died at Bingham House in Richmond, Surrey, England on September 24th 1924. The reason he died in England is not known. Perhaps he and Katherine were visiting?

Hopefully someone who sees this story will have more information on Henry and is family.

Not much is known about James ORMSBY, third child and second son to James ORMSBY ands his wife Helen STEEL. The St. Quivox Old Parochial Record (OPR) recorded his birth.

James grew up with his family at Brickrow Farm for this first twenty years of his life. The 1871 census listed James, 20, ‘farmers’ son’ at Brickrow.

James’ life may have changed with the death of his father James on October 12, 1871. His father’s will identified a £100 Endowment Policy with the St. Patricke Assurance Company of Ireland to go to James on his 21st birthday, 16 November 1871.

Receipt of this windfall may have provided the chance to escape the farm that James had been looking for. His brother Richard [Richard Steele ORMSBY] had already left home and worked as a ‘banker accountant’ in Cumnock. His brother Andrew [Andrew ORMSBY] worked as a ‘clerk’, but as the eldest son he would be expected to help run the farm upon the death of his father. His brother John [John ORMSBY] was 15, but would stay and work the farm with Andrew. The youngest brother Henry [Henry ORMSBY] was 12 and still attended school.

Wherever James went after 1871 his trail goes cold. I have not found him in subsequent Scottish census, birth, marriage, or death records. Emigration records have not been thoroughly checked. He is not listed in the St. Quivox family cemetery inscriptions, even as an ‘in memoriam’ mention which might be done if he was buried elsewhere. Perhaps James emigrated and / or lost touch with his family?

Hopefully a descendant of James’ will see this blog and contact TheirOwnStories so that James story can be continued.

Andrew ORMSBY was born on 19 August 1848 in St. Quivox, Ayrshire, Scotland, the first son and second child born to James ORMSBY and his wife Helen STEEL.

Left: Andrew Ormsby, at Brickrow Farm, Ayrshire, Scotland, on 30 October 1924 at the wedding of his niece Jane (Jean) Muir ORMSBY to James McGUIRE. This photograph is now in the collection of an Ormsby family descendant who still lives in Ayrshire, Scotland.

Andrew lived an uneventful life at Brickrow Farm and a short distance away at Gibbsyard. The census recorded Brickrow Farm as his residence and listed his occupation as ‘farmer’, ‘agricultural labourer’ or ‘farm labourer’. For a brief period he considered leaving farm work as the 1871 census listed his occupation as ‘clerk’. Perhaps it was the death of Andrew’s father on October 12, 1871 that altered Andrew’s career choice and he was required to help run Brickrow Farm with his widowed mother Helen and his younger brother John [John ORMSBY], 15.

Andrew likely had no option but to return to farming. His brother Richard Steele [Richard Steel ORMSBY] had already left home and his brother James [James ORMSBY], who reached the age of 21 on 16 November 1871, had received the £100 from his father’s will and had no intention of staying on the farm. Andrew was not mentioned in his father’s will, perhaps it was assumed he would take over the running of Brickrow Farm. Whatever the situation, by 1881 Andrew was listed as a ‘farmer’ and so was to remain for the rest of his life.

Andrew lived at Gibbsyard, Auchincruive from 1901 until at least 1913. The move to Gibbsyard likely occurred after Andrew’s brother John brought his new wife Helen Ramsay MUIR to Brickrow in 1894. The 1911 census listed Andrew (61) sharing a home at Giibsyard with his widowed mother Helen (89), widower brother Henry [Henry ORMSBY] (52) and Henry’s two sons James [James Henry ORMSBY]  (21) and Robert [Robert Lamont ORMSBY] (19). In 1913 Andrew, as eldest son, signed the death registration of his 92 year old mother Helen. Sometime after 1913 Andrew moved back to Brickrow Farm and continued to help his brother John and family with farming activities. He died there on 07 January 1928, 79 years old of ‘heart disease’’ only three months after his brother John.