James Henry ORMSBY was born 18 January 1890 in McLellan St., Dumfries, Dumfriesshire, Scotland to Henry ORMSBY and his wife Mary Jane LAMONT. After his mother’s death in 1892, he lived with his father, Uncle Andrew Ormsby [Andrew ORMSBY] and paternal grandmother Helen Ormsby [Helen STEEL] at Gibbsyard in Ayr. He attended a four year Mechanical Engineering course at Glasgow Technical College. Upon completion of five years apprenticeship in mechanical engineering (steam, internal combustion, gas) by 1911 James, 21, was a Marine Engineer. At some point he also took a seven month ‘aeroplane construction including aero engines’ course.

In September 1911 James went to Singapore in the Straits Settlements, a separate Crown colony, directly overseen by the Colonial Office in London. At the time Singapore had established itself as an important trading port and developed into a major city with rapid increase in population. In Singapore James worked for the Heap Eng Moh Steamship Company owned by Chinese millionaire Oei Tiong Ham known as the ‘Java Sugar King’ but his business was far more diverse than the title suggested as his ships traded rice, sugar, rubber, opium and other supplies throughout the region. It was a time of rapid expansion for the company which later was described as a ‘vast business empire’. James no doubt saw the potential for work and progress and likely encouraged his younger brother Robert [Robert Lamont ORMSBY] to join him in the region.

James spent nearly three years in Singapore. During the time he also learned the local language as his military service records noted that he spoke “Malay, Chinese (Coolie)”. In July 1914, just a month before WWI broke out, James returned to Britain.

In April 1915 James joined the Royal Naval Air Service (RNAS). He was appointed an Acceptance Officer at the Admiralty where he acted as an Observer and Inspector. He moved to Ealing, a borough of London, England and worked at the Admiralty office in Hotel Cecil, The Strand, London. Ealing was about a twenty minute ride from the Hotel Cecil where James was posted.

On 18 December 18, 1915 James married Agnes Anderson DRUMMOND in Edinburgh according to a Sheriff’s Warrant. Agnes, born about 1889, was from Cupar, Fife, Scotland, the daughter of retired Marine Engineer David DRUMMOND and his wife Georgina DAVIDSON so it is likely that James met Agnes in Scotland through his work and social connections. James’ address at the time of his marriage was 41 The Avenue in Ealing, a building with flats or apartments. After their marriage Agnes moved to Ealing with James.

On April 1, 1918 James transferred from the RNAS to the newly formed Royal Air Force (RAF). Service record phrases “NI”, ‘Section Air Dept”, “housed/working at the Hotel Cecil / HMS President” have led to the conclusion that James was in Naval Intelligence (NI) based at the Admiralty. The Hotel Cecil was requisitioned for the war effort and served as the headquarters for the newly formed RAF and ‘HMS President’ was used to designate the Admiralty.

A daughter [still alive?] was born to James and Agnes in Dundee, Scotland March 23, 1918. Agnes’ address on April 1, 1918 was still in Ealing so it is likely she had returned to Scotland to her family or friends for the birth.

Sometime toward the end of WWI, James was posted to Dundee, Scotland. On January 1, 1920 Captain James Henry Ormsby left the RAF. He was awarded a British War Medal for his WWI efforts. Generally this medal was awarded only to those who had served outside the UK, however exceptions were sometimes made for particular services.

After James left the RAF he and his family lived at 1 St. Johns Wood Terrace, Park Rd, Dundee, Scotland. Post war work may have been difficult to find and he looked for overseas opportunities. He sailed from London for Sydney, New South Wales (NSW), Australia on September 7, 1922 on the P&O ship S. S. Bendigo. He arrived in Sydney November 2, 1922. Agnes and her five year old daughter followed him to Sydney June 19, 1923. Their address when they left Scotland was 3 Gowrie St., Dundee.

NSW Electoral Rolls, 1930 to 1980, provide a picture of the family in Australia. James and Agnes lived at 14 Clifford St., in Parramatta, NSW from 1930 – 1954. James is listed as ‘engineer’ with no indication whether he used the ‘marine’ aspect of his qualifications, however the Paramatta River is the main tributary of Sydney Harbour so it would have been natural for him to do so. James died in 1956, presumably in Parramatta. From 1958-1963 Agnes lived at Taylor Street, West Pennant Hills, Castle Hill, Mitchell, NSW with her daughter and son-in-law. Agnes died in 1964. It is not known whether any children were born to James and Agnes in Australia.

Hopefully this blog will reach descendants of James and Agnes Ormsby and information can be added to their story.

Henry ORMSBY, born on 19 February 1859 at Brickrow Farm St. Quivox & Newton, Ayrshire, Scotland, was the youngest of James ORMSBY and his wife Helen STEEL’s seven children. His father, James, was not home at the time of his birth, although there is no indication where he was; perhaps in Ireland, or at a cattle sale elsewhere in Scotland. The decision about a career or job was important and Henry watched the choices made by his four older brothers. Like his older brother Richard [Richard Steele ORMSBY] (and maybe James [James ORMSBY]), Henry decided that farming was not for him. He chose a life at sea and had ample opportunity for apprenticeships and training in the seaport town of Ayr. By 1881 Henry, 22, lived in Tynemouth, Northumberland, England as an unemployed marine engineer, perhaps still an apprentice. By 1887 at the time of his marriage Henry had attained his Master’s Engineering ticket.

After Mary Jane’s death Henry moved home with his sons where he had family to help raise them. His work as a marine engineer likely required him to be away for extended periods. In the 1911 census he lived at Gibbsyard with his mother (89), his brother Andrew (63) and his two sons. This census identified that at age 52 Henry had retired.

Photo left, standing, left to right is Henry and Thomas WATSON. Sitting left to right is Henry’s niece Helen (Nellie) McNab Steel ORMSBY and an unknown woman, possibly another niece, a MUIR cousin. This is the only known photo of Henry. The photograph was likely taken in Ayr, Ayrshire as there is no record of Nelly having travelled. The date is prior to 1912 as Thomas Watson, a chauffeur, immigrated to Canada in 1912. Photo is from the collection of Donald Slater, (for Donald’s other family photos see www.flickr.com/photos/palaeoecogeek).

On 4 June 1913, at 121 High Street in Ayr, widower Henry married Katherine MUIR, the daughter of Thomas MUIR and his wife Jeanie CRAWFORD.

Henry died at Bingham House in Richmond, Surrey, England on September 24th 1924. The reason he died in England is not known. Perhaps he and Katherine were visiting?

Hopefully someone who sees this story will have more information on Henry and is family.

Henry (Harry) ORMSBY was born on 10 June 1911 in Brickrow Farm, Ayrshire, Scotland, the eighth and youngest child of John ORSMBY and his wife Helen Ramsay MUIR. Harry, as he was always known, was named after his uncle Henry ORSMBY and was a benificary in his uncle’s will. Family events provide a glimpse of Harry’s life. Only 16 when his father died in 1927, responsibility for the farm and family fell to him as he was the only surviving son. Harry made the trip to the Registrar’s Office to register his father’s death. Three months later, Harry again made the trip to the Registrar’s office; this time to register the death, at Brickrow Farm, of his uncle Andrew Ormsby.

Harry lived with his mother Helen and sisters Helen (Nellie) McNab Steel ORMSBY and Margaret (Peggy) Wilson ORMSBY at Brickrow Farm. In 1929, two years after his father died, he was the informant of the death of his 85 year old grandmother Helen MUIR (maiden surname McNAB) at Brickrow Farm. Cause of her death was ‘senility’ and she had been cared for by the Ormsby family for some years.

Harry was close to his Muir cousins, the children of his uncles Gilbert MUIR and George Kennedy MUIR. On December 16, 1931 Harry, 20, was witness to the marriage of his cousin Annie Clement MUIR to James COLVILLE at 11 Maybole Road (‘Dean Cottage’) in Ayr. (for Muir family cousins see page ‘James and Helen (MCNAB) MUIR Family’ under heading ‘MUIR’ top of screen)

On January 3, 1940 Harry was again a witness to the marriage of a Muir cousin, this time when James Douglas (‘Douglas’) MUIR married Phyllis HEATH, at North Church in Prestwick, Ayrshire.

Harry and James appear to have been close cousins since, when Harry (36) married Annie Young SPROAT (40) on 29 January 1947 Douglas was a witness to their marriage. 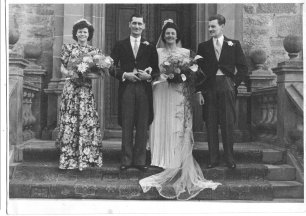 Annie was born on 27 December 1907 in Skerrington Mains, Hurlford, Ayrshire, Scotland to John SPROAT and Isabella NELSON. Annie’s father had a small land holding just across the road from Brickrow Farm so she and Harry had known each other for years. Annie moved to Brickrow Farm, where her rather formidable and domineering mother-in-law Helen lived. Peggy, Harry’s sister Margaret, took a housekeeping job in East Kilbride and took their mother Helen with her to give the newly married couple more space to themselves at Brickrow Farm.

Harry and Annie continued to farm at Brickrow until Harry’s retirement, aged 65, in 1976. Throughout this time, family from Canada stayed in touch and visited whenever they were in Scotland. 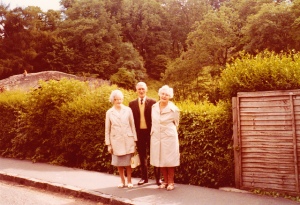 Photo left: Harry and Annie Ormsby in Ayr, about 1982 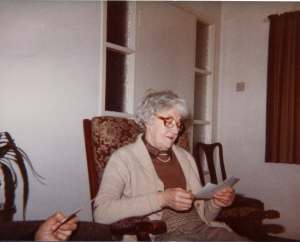 Harry and Annie continued to farm Brickrow until they retired when they moved to 18 Duchvay Place, Coylton in Ayrshire. After Harry’s death on 20 January 1983 in Heathfield Hospital, Ayr,
Ayrshire Annie contined to live in Coylton. She died July 8, 1993 in Ballochmyle Hospital, Mauchline, Ayrshire, Scotland.

John (Johnnie) Muir ORMSBY was born on 26 June 1906 in Brickrow Farm, St. Quivox, Ayrshire, Scotland. He was the seventh child and second son born to John ORMSBY and his wife Helen Ramsay (MUIR) ORMSBY. While not much is known about Johnnie, it is likely that great expectations were placed on him by his parents, who had already lost their first son James Muir ORMSBY [see post 23 November 2012] four years before Johnnie’s birth.

Unfortunately, their hopes were not to be realized. Johnnie, aged 17, died at Brickrow Farm of tuberculosis on 17 May 1924. He was the fourth child of John and Helen’s to die.

There are no known pictures of Johnnie.