This story is dedicated to Mary Janet McConnell Smith, a descendant of Isabella WATSON and her husband John McCONNELL. Mary was born in Seattle, lived in Montana and now lives in Tennessee, USA. Mary has been, and continues to be, central to the research and interest in the story of Isabella and John McConnell and their descendants.

[Please keep checking this space, Isabella’s story will be told here as material and photos become available, the last information and / or images added 06 June 2013]

Isabella Watson McCONNELL, was born on 5 April 1891 at Carcluie Cottage, Ayrshire, Scotland to John McCONNELL, a gamekeeper and his wife Isabella WATSON. Isabella (often known as Isa), the fifth child and third daughter, was named after her mother Isabella.

In the 1891 census Isabella was ‘under 1 month’ old; her grandmother Mary HUNTER was also at Carlcuie as a ‘nurse’, obviously to help her daughter with the new baby and the other four children under the age of eight. The day of the census there was a visitor to the family, Mary THOMSON, 23 and unmarried. It is not known at this time whether Mary Thomson was related to John Hay THOMSON who would marry Isa’s older sister Janet Watson McCONNELL in 1912.

Photo left: Isabella, summer of 1895 [see post 16 April 2013 for family group photo]. Photo is from the collection of Mary Smith (in Tennessee). May Wood in Ayrshire, Scotland also has a copy of this photograph.

By 1901 Isabella, 9 years old, attended school. Her small world crashed sometime after 1902 when her father had to leave his lifelong job as a gamekeeper. While the reason he left his job is as yet unknown, it seems certain that he would not have left his job voluntarily as he had a large family to support, no prospects of work and certainly no savings. Suddenly the family, who had been born and brought up at Carlcuie, were forced into low-rental accommodation and, from records found to date, appear to have moved frequently.  Additional misfortune struck the family when, on 11 June 1904, Janet’s mother, who had been seriously ill for some time, suddenly died in the Western Infirmary in Glasgow after an unsuccessful operation. At the time of her mother’s death the McConnell family lived at 7 John Street in Ayr, and Janet’s father had found work as a ‘auctioneers warehouseman’. The seven children of the motherless McConnell family, and their father John, were no doubt devastated.

Isabella was 12 at the time and her older sisters Mary (Mary Hunter Morton McCONNELL) (21) and Janet (15), would have  taken over much of the care of the family, particularly the younger children Elizabeth (9) and, William (2). Her brothers John (19) and Thomas (17) had completed school and worked outside the home; John as an apprentice joiner and Thomas as a clerk. The extended family also rallied around; aunt Janet (WATSON)  and uncle Gilbert SPEIRS probably lived nearby and no doubt Isabella’s grandmother, Mary Hunter helped. Janet’s Uncle Thomas WATSON and Aunt Jane (MUIR) did not live in the Ayr area at the time, however we know from postcards that they stayed in close touch with the family and were no doubt involved in family discussions about the future.

Little did Isabella know at the time how this period in her life was to shape her future. In time she moved away from Scotland; lived for a time in Ellisboro, Lemberg, Rosewood and Wolseley Saskatchewan; married in Montana, USA; and ended her days in Seattle, Washington, USA. But in 1904 all that was in her future.

In the early 1900s, as have been noted in other stories about the extended Watson-McConnell-Speirs families, Isabella’s siblings, aunts, uncles, and cousins had started to move away from Scotland. In June 1909, Isabella’s elder brother John MCCONNELL, 24, a carpenter, sailed for New York and settled in New Jersey. By April 1910 all of Isabella’s Watson cousins (with the exception of her cousin Thomas WATSON, a chauffeur in London), and her Uncle Thomas and Aunt Jane Watson had moved to Saskatchewan. No doubt they encouraged others to follow. The McConnell family siblings viewed the move from Scotland from their own perspectives. Isabella’s older sister Janet married John Hay THOMSON in June 1912;  In November 1912 Isabella’s younger sister Elizabeth (Bessie), 17, sailed for Montreal with her Aunt Janet (Watson) and Uncle Gilbert Speirs. Also on the ship S.S. Cassandra was Isabella’s cousin Janet SPEIRS, daughter of Janet and Gilbert Speirs.

By the end of 1912 the only members of the McConnell family left in Scotland were: Isabella (21) her older sister Mary (29); her married sister Janet; young brother William (10); and father John (57). Her brother Thomas had died in 1905. Janet and her husband John elected to stay in Scotland, it is not known whether they ever considered a move to Saskatchewan.  Mary decided to stay in Scotland; the decision was made that Isabella and her brother would move to Saskatchewan. Family stories indicate that their father John had decided to move with them, which seems reasonable as William was still a minor and, as his father, John was responsible for him. Plans were made, tickets purchased. Unfortunately, Isabella’s father died suddenly in January 1913.

Isabella, 22, and William, 11, continued with their plan and on 5 July 1913 travelled to Glasgow where they boarded the S.S. Letitia and sailed for Montreal. Isabella listed her occupation as ‘domestic’

Photo left and below: Isabella, taken in 1913. Was this photo taken in Scotland before she sailed to Canada in 1913? From the collection of Mary Smith, Tennessee.

In later years Isabella became known as ‘nurse McConnell’, although it is not known

at this time if she received formal medical training or whether she was a mother’s helper or what we might today call a nanny. If she had trained as a nurse she would not have listed herself as a ‘domestic’ on the passenger list; a nurse would have been a much more desirable occupation.

Photo left: Isabella, dated 1920. From the collection of Mary Smith, Tennessee. Does this uniform indicate that she is a trained nurse, or is this of a nurse involved in Red Cross or similar activities?

Isabella appears to have lived for a time in Ellisboro, Saskatchewan – perhaps with her Aunt Janet and Uncle Gilbert Speirs. She likely worked for families in the area, helping with their children and household chores. Her cousin Janet SPEIRS and her husband

John INGLIS also lived in the Ellisboro area, and Isa may have helped with their children Janet (Jenny) INGLIS and her brother John (Jack) INGLIS.

Photo right: Isa has written on the photo: Little Jenny and Jack Inglis with Isa. The photo was taken about 1917 in Ellisboro, Saskatchewan; the hills of the Qu’Appelle Valley can be seen in the background. 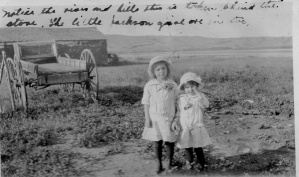 Photo left: In Isa’s handwriting – Notice the rivers and hills [of the Qu’Appelle Valley] this is taken behind the store The little Jackson girl are in too. Jenny Inglis may be the girl on the right?. Isa sent both of these photos back to her sister Mary in Girvan, Ayrshire, Scotland where they are still in the collection of May Wood, a descendant of Mary.

Isa did get involved in the Ellisboro community and joined the local Ellisboro church; the photo at right, labelled “English Church at Ellisboro” she sent to her sister Mary

This church was right across the road from where the Speirs family lived in Ellisboro. The photo right, from the collection of May Wood in Ayrshire, was likely taken in 1917, on the same roll of film as the above photos of the Inglis children.

Photo below taken in Ellisboro by the author in 2004.

Several years later, in 1922, after Isa had moved to the United States she no doubt informed the church she was no longer part of the congregation and received the certificate below. The certificate is now in the collection of Mary Smith in Tennessee.

In 1917 Isabella had been in the Ellisboro area of Saskatchewan for four years and she obviously considered this her new home.

In May of that year she was working in Wolseley Saskatchewan and sent a post card to her cousin Jean WATSON, C/O of Ellisboro post office. The picture on the postcard of Wascana Lake in Regina; she had no doubt bought the card on a trip to the city.

Wolseley, May 25, 1917. Hello Jean, How are ya and all the folks up home? Did you have a good time at the picnic? Had a nice day for it anyway. And I was disappointed at not getting out there. Saw Sandy yesterday he say his job is not all its cracked up to be. They are still working on Magers [?]. Hope to see you soon. Kindest regards to all. How is the seed and garden coming on. Isa

[Isabella’s story to be continued